“Canstruction® is a unique charity which hosts competitions, exhibitions and events showcasing colossal structures made entirely out of full cans of food. After the structures are built, the cansculptures® go on display to the public as a giant art exhibition. At the end of the event, all food is donated to local hunger relief organizations” – Canstruction Inc.

After a three year hiatus, BRW Architects is once again participating in Dallas’ CANstruction Event. The structures are showcased this year at the Texas State Fair.  An unprecedented 24 teams, consisting of Dallas architecture and engineering firms, are participating in what is expected to be the most viewed competition in Dallas CANstruction history.

BRW’s early brainstorm sessions focused on this year’s Texas State Fair theme: Deep in the Heart of Texans, and what that means to the City of Dallas, or as it is lovingly called, “The Big D”.  After some brainstorming, the team settled on an idea inspired by the Dallas B*G Campaign and a coworker’s strange obsession with the 3’-6” high droid from Star Wars.  From there, the cansculpture, “Big D2” was born.

Team BRW then developed the design through a digital model, which enabled them to determine the number of cans needed (roughly 2,000), any structural issues, and the amount of money that need to be raised.  Fundraising, to buy the cans and other materials, was done in the form of solicitation letters which were sent to local businesses along with an invitation to the First Annual BRW Art Show and Silent Auction. 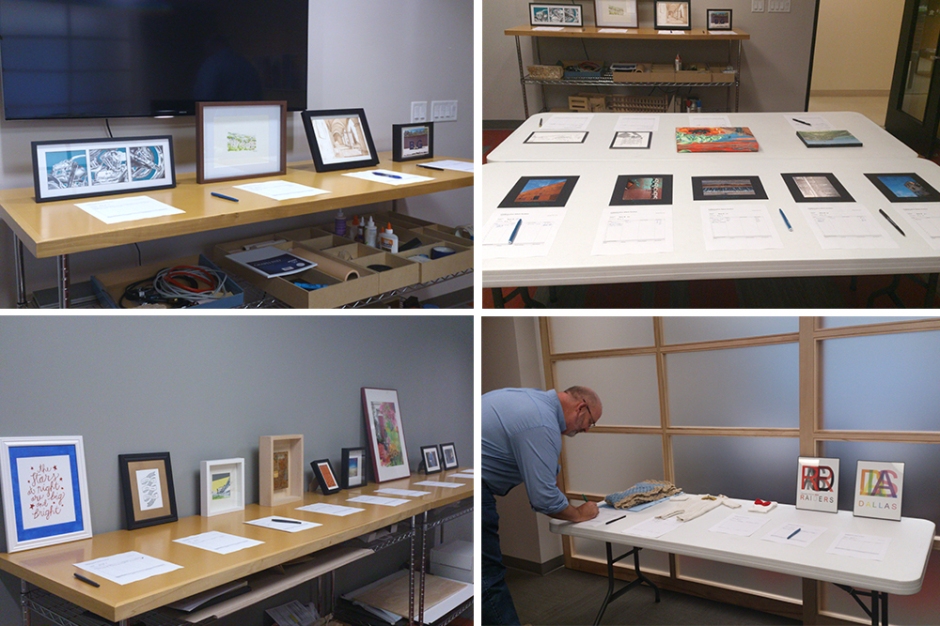 The Art Auction showcased over 25 items created and donated by BRW affiliated artists to help raise money for the BRW Team’s CANstruction build.  The silent auction was a fantastic success, giving our in house artists an opportunity to showcase their work to the public while generating over $1,000 for CANstruction (which made the Art Auction BRW’s most successful fundraiser to date).

“I knew I wanted a piece to take home with me.  An hour into the auction, nobody had placed a bid on the Judd Marfa piece by Masako.  I dove in first and made a bid. Later I was checking up on the list, there were 4 other bids listed.  I figured I would just up the bid with a slight increase.  Charles, who had his name listed before mine, placed another bid.  Naturally, I upped it once again.  Little did I know that Charles and I would be battling it out to the last minute. Charles finally reached his price max, so I stepped in to outbid him by a mere 5 dollars. The piece eventually auctioned for $95 and victory was mine.” – Sonya Shah, BRW Architects

Build day arrived on Saturday September 20, and “Big D2” was skillfully constructed at Fair Park in the Science Building with the help of BRW employees, friends, and family. We would like to thank everyone who this possible, especially our sponsors: Denitek, CCM Construction Services, and City Sprint!

If you live in “The Big D” or plan on visiting, be sure to visit the Texas State Fair.  You can stop by the Science building to see the sculptures of CANstruction.  Visitors can donate $1 to vote for “Big D2” as your fan favorite. The Texas State Fair opens on September 26 and runs through October 19.  After the close, all cans used in the cansculptures will be donated to the North Texas Food Bank.