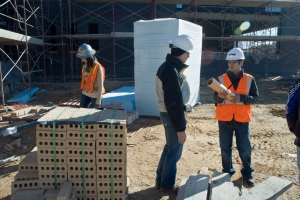 There are certain moments in your life when your face lights up so bright, you could lead a blind man through a crowded street.  Yes, those are the moments you think “That was AWESOME!”  I call them WOW cake.

A WOW cake came to me this past weekend at a site visit to John. T. White Elementary School in Fort Worth.  (Ok, ok… there were actually multiple ones.)   Now…what happened might you ask that was so inspiring, so full of awe that I would actually give it such an honored label?  Well, for those of you unaware, I’m an aspiring architect.  You know, we design stuff, solve problems, make dreams come true, yadda yadda yadda, but most of all….GET STUFF BUILT.

Now my exposure to the “GET STUFF BUILT” category has been quite limited.  So when an opportunity arises that includes “GET STUFF BUILT” and potential “WOW cake” status, I mean COME ON!  That’s a no brainer!  And to add even more icing to the WOW cake, there were going to be several “GET STUFF BUILT” experts there so I could ask tons of questions.  And oh my, did I.  I asked about the brick, the black stuff on the CMU (which by the way is damproofing!), the flashing details, the end dam for the flashing (which by the way I didn’t know existed till Drew pointed it out!), the fire dampers, the door frames, and the list goes on!  And, I even climbed 2 ladders!  Ok, ok…one was like a steep stair, but the other was like 100’ tall and had spikes!  Well, it looked like it anyway.  I mean I had a knowledge intake overload!  And then…..it was over… just like that.

But you see… that’s when it hit me.  Not only did I have “a moment”….I had tons of them.  I not only got the extra icing on the cake, but sprinkles, fresh strawberries, and a cake cover to maintain moistness.  I had gotten a  WOW cake.

Thanks Charles, Drew, Doug, Ronnie, and Masako.  That was AWESOME!